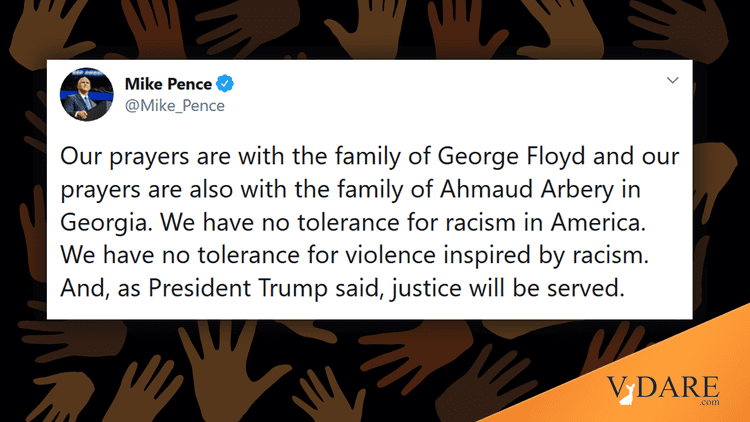 See also: Could The End Be Near For Trump-Subverter Jared Kushner?

President Trump’s top aides, plus Vice President Mike Pence, Senate Majority Leader Mitch McConnell, House Minority Leader Kevin McCarthy and what seems like the entire Congressional GOP, plus Conservatism Inc., have taken the knee before the Floyd Hoax riots--echoing the Left’s Narrative that police must be handcuffed, law rewritten, and “institutional racism” abolished. Only Arkansas Senator Tom Cotton has stood up for the Silent Majority of Americans who want the riots, and rioters, put down. And maybe Trump himself, in a few hesitant tweets. He better stop hesitating. His re-election depends on it.

To keep the Floyd Hoax in perspective, remember:

Now, as a fish always rots from the head down, let’s start with the doings at 1600 Pennsylvania Ave.

The Trump campaign account tweeted an edited version of his tough June 1st Rose Garden speech, shifting the focus from Law and Order to racial injustice with scenes of wailing blacks and hagiographic images of Floyd, implicitly endorsing the Black Lives Matter line. “We must defend the rights of every citizen to live without violence, prejudice, or fear,” the caption read. “We are working toward a more just society, but that means building up, not tearing down. Standing in solidarity, not surrendering to hostility.”

In other words, Trump’s campaign handlers apparently believe pro-BLM rhetoric will sell better than Law and Order, despite the President’s explicit rejection of BLM, promise of swift action against rioters, and general avoidance of talk about “racial injustice,” etc. etc..

The video they Tweeted has been removed by Twitter, allegedly due to a copyright claim by some MSM rights holder:

Those around him, including Vice President Mike Pence, typically a loyal soldier, just haven’t gotten this message. Pence soft-peddled the president’s tough line and just had to include the boilerplate about “racism.”

Not to be outdone, Senior White House adviser Kellyanne Conway, generally a pit bull for the president, said likewise, and for good measure declared policeman Derek Chauvin guilty of murder: “It is absolutely the case that there is institutional racism and that there is a lack of equality for all people in this country. … We watched a man be murdered” [Kellyanne Conway: ‘We watched a man be murdered,’ by Katherine Doyle, Washington Examiner, June 02, 2020].

Whether Chauvin and his fellow cops deserve a fair trial or should be summarily executed, Conway didn’t say.

As a nation, we have to say no more. No more racial discrimination. No more looting. No more senseless violence.

In order to honor George Floyd, this moment must be about who we are—and who we hope to be—as Americans. pic.twitter.com/hGxQMlbWlk

This reprised the intrepid Minority Leader's statement on Ahmaud Arbery last month: “An American citizen was gunned down while running in his neighborhood. ... He was born on Mother’s Day, 26 years ago. My heart breaks for his mom, Wanda. We honor his story by calling for justice.”

Today the Senate reconvened and I had the chance to say a few words about the tragic and unjust death of George Floyd - and the cause of liberty & justice to which his death summons us pic.twitter.com/KTXiLVCSsi

Hawley claimed Floyd died of asphyxiation, relying on the Floyd family’s privately purchased autopsy. The official autopsy says Floyd’s heart stopped during the struggle and that he had no life-threatening injuries. It does not mention asphyxiation, and says he had fentanyl in his bloodstream [2 Autopsies Released In George Floyd’s Death, From Hennepin County And Independent Group, CBS Minneapolis, June 1, 2020].

We must not shy away from identifying racism as an obstacle to black prosperity. Racism haunts our nation’s history and legal structures. And while it is undeniable that great progress has been made on this front, it is also dishonest to pretend it is no longer a factor at all. Should anyone doubt that, they need only consider Ahmaud Arbery’s murder. How else can we explain a young man out for a jog being chased down and shot in the street in an act of baseless vigilantism?

[Deindustrialization, racial discrimination, and the case for common good capitalism, by Marco Rubio, Medium, May 27, 2020]:

Off Capitol Hill, the bright lights of the Stupid Party and Conservatism, Inc., joined the caterwauling.

Bad cops need to be held accountable and punished swiftly. They need to be made examples of and procedures should change but don’t underestimate the many good officers out.

They are a vivid reminder of the systemic racism in this country. This injustice stains the American soul and makes a mockery of our highest ideals. It’s white America that now must see the truth, speak the truth and act on the truth.

It would be almost too much to bear if it weren’t for Cotton, one man with courage that we hope makes a majority, as Andrew Jackson never said. Writing in the New York Times, Cotton demanded federal troops to put down the lawless mobs [Send In the Troops, June 3, 2020].

He wasted only one sentence on the peaceful protesters before nailing the rioters.

[T]the rioting has nothing to do with George Floyd, whose bereaved relatives have condemned violence. On the contrary, nihilist criminals are simply out for loot and the thrill of destruction, with cadres of left-wing radicals like antifa infiltrating protest marches to exploit Floyd’s death for their own anarchic purposes.

Needless to say, most Americans agree with Cotton, as he noted in citing a poll I reported in my last piece here: 58 percent of Americans support the use of federal troops; only 30 percent oppose such a move,

But the Razorback senator is the one of the very few Republicans willing to stand up for the Silent Majority. Just two other GOP congressmen, Florida Rep. Matt Gaetz and Texas Rep. Lance Gooden, have called for force against the riots and state suppression of Antifa. They are an astoundingly small minority [Rep. Gaetz defends his tweet about Antifa flagged by Twitter for 'glorifying violence,' by Chorus Nylander, WEAR TV, June 2nd, 2020]. 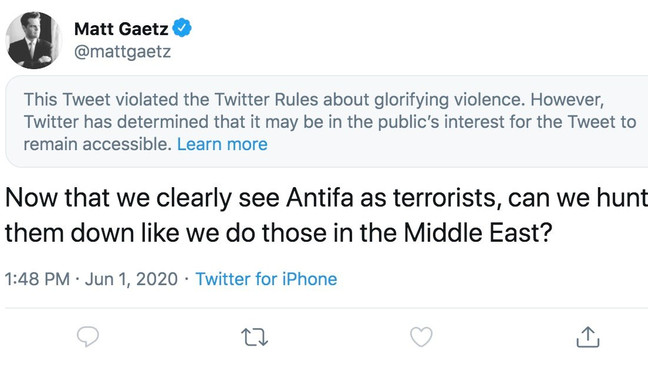 Trump is torn. His law-and-order instincts are right. Jared Kushner and his advisers, who tell him to cave to the racial agitators, are wrong [Trump's Divisive Instincts Helped Him Win the White House. Where Will They Take America Now?, by Brian Bennett, Time, May 31, 2020]. Though the riots are dissipating, they will explode again when the next “Gentle Giant" dies in police custody or if, by some remote chance, a jury acquits Chauvin. Appeasement will have failed. Then what?

The only reward Trump has received for bailing on his law-and-order platform is three percent support among blacks, and, of course, ever-lasting ingratitude and contempt from the Democrat/ Main Stream Media Complex.

The GOP’s cucking to the BLM narrative will turn off the GOP’s base and will prove catastrophic in November, particularly if the riots erupt again. Then again, perhaps that’s the plan.

We likely face a scorching summer. Trump only chance is to prove he’s made of sterner stuff than the Stupid Party Cucks and stand with the Historic American Nation against BLM-Antifa-MSM-Democrat Axis of Evil.